Formwork, Waffle Pods and Steel. Lows and highs of the week. 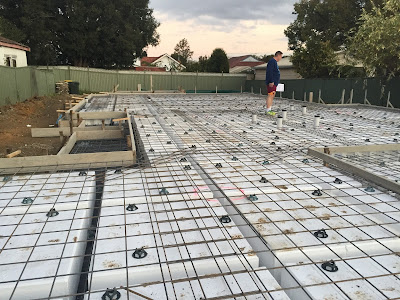 Week 3 of our construction program and we are at pre-pour stage of our slab.
Our Site Supervisor was spot on regarding the slab timing. Whilst on the phone with him on Friday, he confirmed the slab pour for Monday and he also advised the frames will arrive on the 28/8. Lets hope the progress continues to accelerate. This week has had its lows and highs, so lets catch up on what happened this week.


Monday (10/8)
As stated on my last update, I spoke with the Structural Engineer at RE about my concerns of covering the piers with soil. Rick assured me that this was not within design specifications. One of his team inspected the piers before pouring and they were unaware that additional leveling took place after pouring the piers. Suffice to say, Rick was unimpressed by my report. He assured me that he would speak with the concretors to clear the piers and make sure they are clearly visible on the final inspection prior to slab pour.

I also discussed this issue with our SS, and he clearly stated he wasn't concerned. Mark advised that these experts' and contractors know what they're doing, and it's a certified solution so there are no surprises. Mark advised a fortnight ago that his contractors and engineers work closely together and he doesnt really get involved in this stage of the project. I wasn't really fussed about his attitude on the matter, but to be honest the problem is with his experts.
This isn't a SS issue. I'm on his side on this one. I just don't trust these trades like he does  ;)

I dropped by again in the afternoon.
Plumbing roughed in. There were also deliveries for the various types of reinforcing, mesh chairs, and the supplier arrived to deliver the waffle pods. 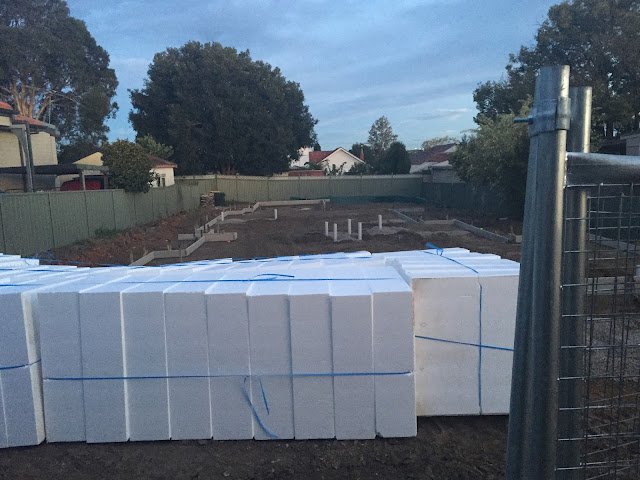 Thursday 13/8
This unfortunately is what I was worried about. Inch thick clay covering the concrete piers make the whole structure useless. I'm livid this hasn't been looked at.

Friday 14/8
Much relieved today. I met up with the boys on-site and spoke with them about the piers. They had waited for the plumber to complete his work. They scraped back all the piers this morning and I could see piles of dirt around the form work. I'm not sure they would have done this had I not referred the issue to the engineers. In any case, all good now.

The boys have been busy this morning. Membrane down and sealed. Edge beam reinforcing. Edge lapping and pods getting laid out whilst I was there.
The rentokill Contractor also turned up to install the barriers. These are the orange skirts on the PVC pipes.

Saturday 15/8
I dropped by late afternoon to have a look at the final formwork in preparation for the pour on monday. 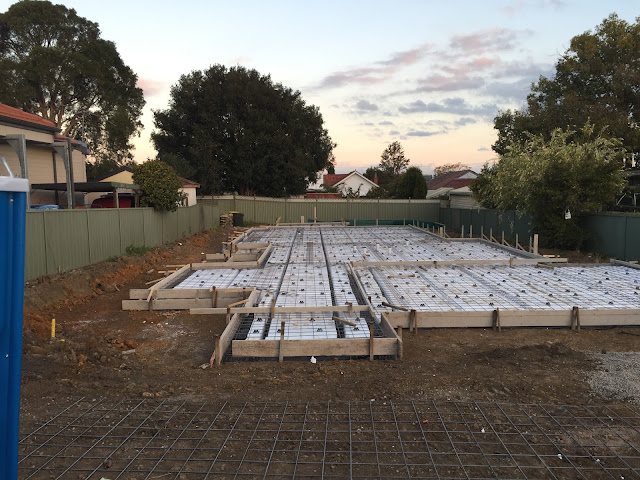 No more than 2 minutes go by, and a guy pulls up and jumps out of his car. It's the principal engineer from RE, Rick. He dropped in after playing some sport in Ermington... at 5pm?. Wow. I'm impressed by this guy. He walks me through all the areas, and points out each item on the plan. He also refers to three things that he will pass over to the concretors.
1) Insufficient slab thickness on the drop edge beam (west side of the alfresco)
2) Waffle pods covering one of the central piers. This should be a reinforced beam, so they will need to cut out a section and drop some steel into it.
3) Formwork on the garage should protrude slightly on the western end to conceal the downpipe. This needs to be "locally widened".