We met Annie roughly two weeks ago for our interior selection meeting at the color selection centre in Rhodes.  We were very pleased with the interior selection process.  The initial appointment with Annie lasted for approximately four hours.  During that time, we went through the entire house, one room at a time.  Annie showed us through the various areas of the Rawson Selection Centre, where we were able to view the products that were available to us as part of the standard inclusions, as well as the products we were able to choose as upgrades.  Annie was a wealth of knowledge, and was able to draw our attention to a number of finer details that we may not have considered on our own.  Although we had some ideas going into the meeting, she really helped with the practical side of the layout and materials.  Whilst the initial appointment lasted four hours, there were many decisions to be made afterwards, and a number of changes in the couple of weeks that followed, before signing off on our selections.  Over the last week or so we have been deliberating over the gas cooktop and fridge / freezer pigeon pairs.  I can finally say we are done. Annie has been extremely patient, and unbelievably efficient.  Her communication is second to none.  Email requests for changes, quotes etc, have been followed up almost immediately, and we have been very happy working with such a lovely, professional staff member, where nothing is too much trouble.

As I am reflecting over the week, I’m so glad we added the Envy upgrade to our tender. 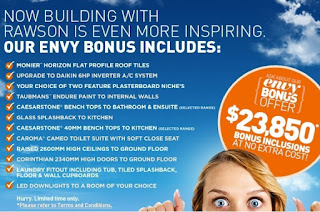 Among other things, the upgrade adds 40mm caesarstone benchtops for the kitchen, 20mm for the bathrooms, and a nice fltout of the laundry.


Kitchen:
We have have chosen 40mm standard caesarstone in 'osprey' for the bench, polytec sheen polar white cabinets and drawers, and polytec belgian oak in matt as the island bench feature panels and drop-down bench. The sheen polytec finish is a variation. This is quite a practical 'middle of the road' choice given the surface shine is not as significant as 'super gloss', which we found seems to show every fingerprint, yet it is also not as dull and flat as the standard included 'matt' finish. We also added this upgrade finish to the vanities in the bathroom, ensuite and powder rooms.
We have added a lowered 'drop-down' bench section in 70mm laminate, off the end of the kitchen island, similar to the one featured in the display home at Kellyville.
We had a few other low cost variations added in, such as finger pull cabinetry, and extra drawers in the island bench section.
Over the week, we also decided on a fisher paykel pair of 635mm wide fridge/freezer units which the kitchen manufacturer ELBA and Rawson thankfully accommodated in the kitchen layout. We struggled to find good alternatives for the standard gas cooktop, and after reviewing 6 alternative options that Annie quoted for us, we decided on the Bosch PCI815B91A.
Towards the end of this week (during our electrical appointment, which I will discuss in the next post) we managed to get approval for the installation of a concealed 20mm timber batten behind the over bench cabinetry to accommodate future LED Strip lighting.  Also, a sneaky 260mm deep drawer in the island bench will be used to hide an internal power point within the cabinet. This will keep the kitchen free of USB / iThingy clutter, as they will charge 'out of sight', inside the 260mm drawer, and off the kitchen bench.

Bathrooms:
Similar to the kitchen, we chose 20mm caesarstone in 'osprey' benchtops, polytec sheen polar white cabinets and drawers. A few extra drawers were added, as we felt the standard vanity didn't have enough.  We chose non-standard basins and went with the Caroma Leda Vasque bench top basin for the Main and Ensuite vanities, and decided to have these semi-recessed in the Powder room vanities, where cabinet space isn't as crucial. A soft close Caroma Cameo toilet is included in all these rooms as part of the Envy Bonus. Lastly, we couldn’t resist the modern Caroma Newbury Bath, so we upgraded these in both the Ensuite and Main.


Laundry:
The Envy Bonus gives you a rather simple but nice little laundry fit out with a drop in sink/cabinet, laminate bench top and broom cupboard. We chose Snow Fabrini bench laminate which mimics the color and character of the osprey caesarstone, and polytec matt polar white. We also requested that the cabinet be moved up the wall towards the hallway/linen cupboard to gain more space for the whitegoods.
We are getting very excited about our huge, functional laundry!

A number of colour decisions were made during our appointment with Annie.  Interior wall color will be quarter tint Surf Mist.  Surf mist is the colour we chose to use externally, and on the window frames, so it should all tone in rather nicely indoors.  Our package allows for one feature wall, and we chose this to be the upstairs nib wall in the leisure room. The nib wall has a recess within the leisure room which will be painted in 'Candlewood'.

The front door, study rimm double glass doors and staircase will be stained in Sikkens Ebony, a lovely rich, dark colour. The staircase itself will be a closed tread, finished in Victorian ash featuring timber posts, handrails and stainless banisters. 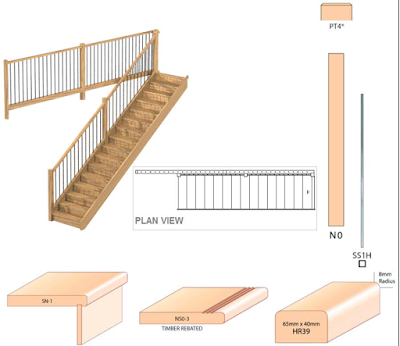 Stay tuned for the next post - electrical fit-out plans!  Some hints so far, but we have more ideas to share that hopefully others can learn from!