Drainage is a drain

Where do I start with this drainage story?  Well, when we first kicked off the pre-construction process and deliberated on the external sections we received the first revision of the site plans and building elevations. It was here that we got a glimpse of the solution;

I questioned the logic on the drainage solution and asked for the referenced hydraulic report. There was no hydraulic design. I requested that Rawson provide a hydraulic design, and this took several weeks. In fact, this was raised on 4/5/15. Only after pressing them repeatedly did we eventually get the report a month later and were quite shocked by the design. I picked up the phone and called the consultant to discuss the detail; 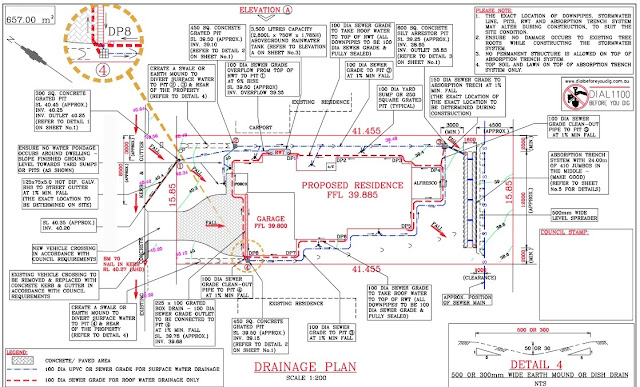 I discussed in detail the need for the absorption trench, its size and the likely additional costs.  He was adamant about the need for drainage of surface flows.  Fair enough.

Next on my discussion list was the location of the Rainwater tank. Its location shifted from the original plan, to the side of the house, right at the front, where it would be highly visible!
I also disliked the fact that it reduced access on the eastern boundary which we have been desperate to conserve for future excavation equipment access (in the case we may one day install a pool) and solar orientation.  I requested that we move the tank to the section DP1 and DP2.
Thankfully Rawson was awesome is resolving this downstream effect. Moving the tank to this area  would require the removal of the south facing study glazing. We couldn't locate this awning window elsewhere, so we asked for a feature window on the east study wall.  This, in turn, created a new challenge. This was where the Electrical Switchboard (SB) was located. As the SB was on the eastern wall of the study, this along with the Gas Meter would need to be relocated to the western wall of the Garage due to the new window.

Wow.
Rawson as i said, were awesome in getting this sorted. A small but important change that was both practical and aesthetic.
Revision A of the Hydraulic design was received, and a $0 Rawson variation for plan changes and we're moving forward; 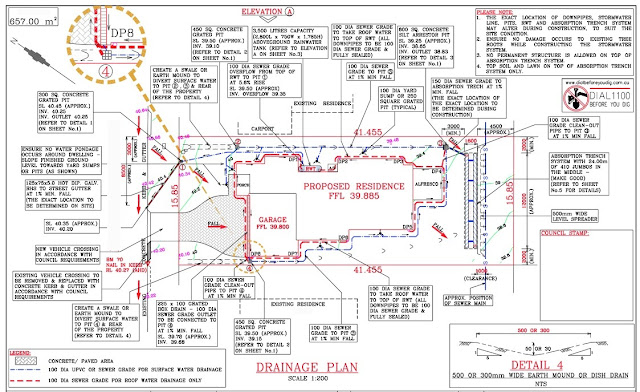 For those interested, this is not a lightweight plan. Quite the contrary.
You can see from the rainwater tank detail, the site plan, and detail 1 (this charged line solution has tight relative levels to conform with) 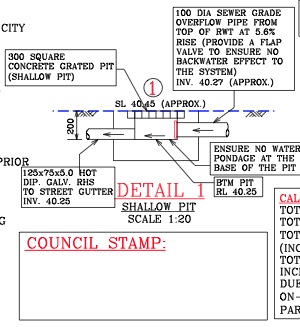 Our next update will be the fixed price variation as they consolidate both sewer and stormwater provisional amounts in our contract.

This is going to hurt.